The biggest fight for the new Lycan King is convincing his Queen that he is committed to her forever. Darren has already fought to convince Cass to give him a chance, but a new Monarchy is just the beginning of the changes to the Lycan Kingdom. But as secrets and challenges to Darren's crown emerge, his inner circle must close ranks to protect their Kingdom, and to make sure the newly-returned Lycan King keeps his crown. Candace Blackburn returns to the world of the Lycan King in this epic, edge of your seat third installment!

Candace is offering two lucky winners their choice of either a $25 Amazon Gift Card of $25 Barnes and Noble Gift Card! To enter, simply fill out the Rafflecopter below: 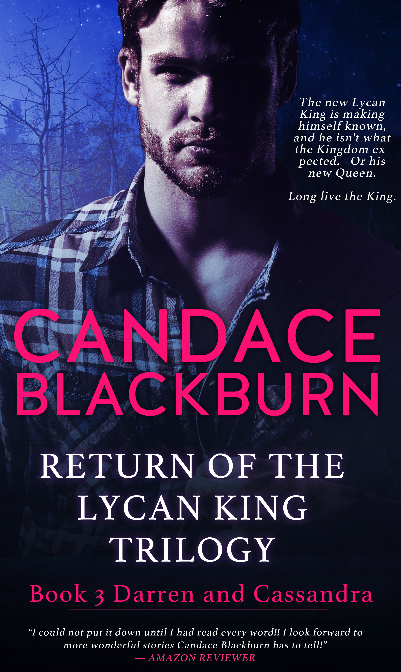 About Return of the Lycan King: Book 3 Darren and Cassandra:

Darren chases Cass to Ireland, determined to make up for his mistakes. When they return to North Carolina to build their lives together, nothing is the same. Darren has already fought to convince Cass to give him a chance, but a new Monarchy is just the beginning of the changes to the Lycan Kingdom. Secrets and challenges to Darren's crown emerge, and his inner circle closes ranks, to protect their Kingdom, and to make sure the newly-returned Lycan King keeps his crown.

Fans of motorcycle romance will love the story of T.A. When she goes looking for Mr. Available, she finds something unexpected. Dalton Andrews was a man looking for someone to get his kids off his back. He never expected her. 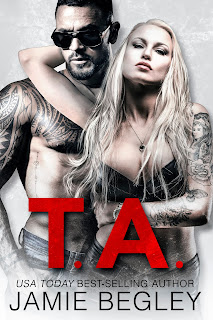 Blurb:
Cuffing season was supposed to be about finding a hook-up to keep her warm during the cold Kentucky winter nights. T.A. wasn’t looking for Mr. Right; she just wanted Mr. Available.
That was before she met Dalton Andrews. The widower was nursing a broken heart, and the only thing he wanted was a woman to take his grown kids’ minds off worrying about him.

It was supposed to be a trade-off—he would keep her warm and toasty during the nights, and she would put up a smokescreen in front of his kids during the days. It was a win-win situation.
That was until the famous actor decided he wanted out of the deal and Mr. Available was a no-show during the biggest snowstorm of the year.

Poor schmuck didn’t realize that all the drama he had experienced in Tinseltown was nothing compared to dealing with this bitch. 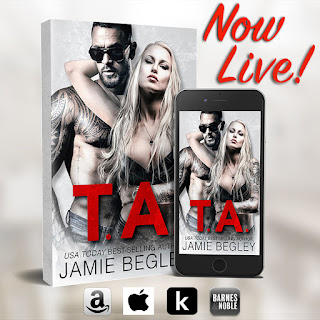 Find out more at: Goodreads

Release Blitz : THEIRS EVER AFTER by Katee Robert @katee_robert @barclay_pr

THEIRS EVER AFTER is LIVE!
In THEIRS EVER AFTER Theo, Galen, and Meg's journey continues as they navigate the new realities of their relationship. Fans of Laura Kaye’s THEIR’S TO TAKE or Sierra Simone’s AMERICAN QUEEN will devour this cinderella-esque ménage.

Start reading the series for FREE! Download THEIRS FOR THE NIGHT, the novella that introduces you to Theo, Galen, and Meg for FREE at:
Amazon: https://amzn.to/2M3w3A9
B&N: http://bit.ly/2Jl0k7Q
Kobo: http://bit.ly/2JxT2Bg
iTunes: https://apple.co/2LtEK1L

Add THEIRS EVER AFTER, FOREVER THEIRS, and THEIRS FOR THE NIGHT to your TBR pile on Goodreads then keep reading to get a sneak peek excerpt and your chance enter the giveaway to win a $50 Amazon Gift Card! 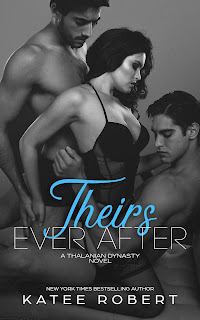 Theo Fitzcharles thought he’d put the worst behind him when he became King of Thalania and named his two lovers, Meg Sanders and Galen Mikos, as his Consorts. Unfortunately, the realities of running a country have worn on all of them, individually and as a triad. Theo has every intention of making things right, but first he has to deal with an old enemy who’s closer than anyone could have dreamed.

Meg Sanders never wanted to be a princess. Now that she’s one of two Consorts to the King of Thalania, she knows why—it’s work. Every time she turns around, she’s misstepping and struggling not to screw up the careful political maneuvering required for her new position. But her struggles with the new position are the least of her worries she’s attacked in the palace.

Theo, Galen, and Meg must race to identify her attacker and neutralize them before they can make another attempt to hurt her. There’s plenty of people who want Meg out of the palace—and at least one isn’t picky about whether she’s breathing or not when she goes.

Rafflecopter for Stranded for Christmas Review and Excerpt Tour Giveaway:

Noelle is offering one (1) lucky Grand Prize winner a paperback set of her Holiday Acres series containing Stranded on the Beach, Stranded in the Snow, Stranded in the Woods, and Stranded for Christmas! Two (2) Runner-ups will receive an eCopy of one book from Noelle’s backlist titles (winner’s choice). To enter, simply fill out the Rafflecopter below:

About Stranded for Christmas: 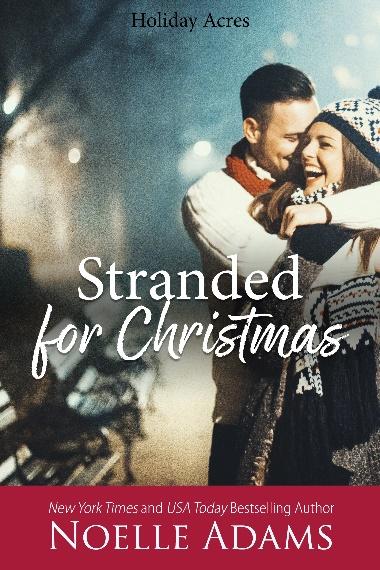 A snowstorm. Her much older business partner. One very hot night.

Laura Holiday doesn’t believe in romance. Her life revolves around her work and her six-year-old son. The last thing she wants is a fling with her friend and business partner, Russ Matheson, who is emotionally unavailable and thirteen years older than her. But one night in a snowstorm changes their relationship forever.

Release Tour : THE WITCH OF THE PROPHECY by Victoria Jayne @barclay_pr

All signs point to Davina being the witch of the catastrophic prophecy, but she’s not so sure.
Out Now! – The Witch of the Prophecy by Victoria Jayne
Follow the Tour and #enter to #win a $20 Amazon Gift Card
Enter at: http://www.rafflecopter.com/rafl/display/b050ef29598/? 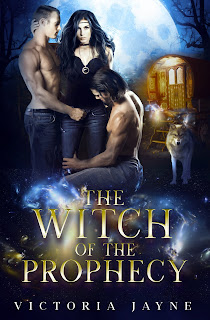 
Synopsis:
Divina’s had it with the prophecy.
The vampire whose heart beats for a witch that belongs to a wolf shall save us all. He shall take his throne and rule over all kinds. If not, the vampire who belongs to the witch will end all kinds.
Divina’s not convinced the prophecy is about her. Her manipulative vampire ex-boyfriend, Rori, is reluctant to give up his love for her to pursue the throne. Meanwhile, the wolf shifter meant to claim Divina doesn’t believe in the prophecy. However, he does believe Divina is his mate.
With the pressures of the prophecy and the most powerful coven in the present-day United States, Divina is left to choose between complying with the prophecy and mating with Aric—or leaving it all behind to allow the catastrophic possibility of supernatural beings getting exposed to humans.
Available now: Amazon US | Amazon UK | Amazon CA | Amazon AU | Barnes & Noble | iTunes | Kobo

Bree’s orderly scientific life turned upside-down the day she discovered her first body…learned her co-worker was a spy…and accepted the mission of tracking down an international terrorist. 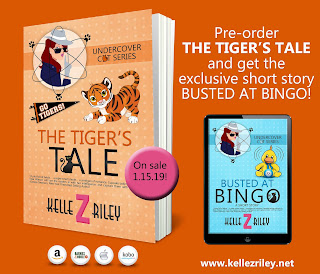 Synopsis:
Is she hitting her stride? Or going nowhere fast?
Fresh from a successful undercover operation, scientist/spy-in-training Bree Watson should feel on top of the world. Instead, the ground is shifting under her feet. When her handler abandons her to follow a lead with his sexy ex-partner, Bree must choose between a normal life, or proving her worth as a spy. Not an easy choice, when she factors in:
Combined with fanatic football fans, beatnik poets, an orphaned monkey, a demanding boss, quirky colleagues, and her angry cat, the result may be a recipe for disaster. 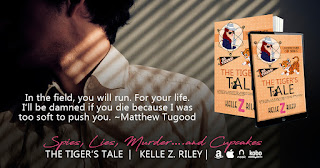 Can she take the heat? Or will she get burned?
Find out more at: Website

Kelle Z. Riley, writer, speaker, global traveler, Ph.D. chemist and martial artist weaves bits of her real life into the Undercover Cat Series books. The series features a scientist-turned-sleuth who juggles mystery, romance and the search for a perfect cupcake recipe.
By day Kelle is a full time chemist working in water treatment with multiple U.S. patents. At night she turns into an author whose accolades include finals in the RWA Golden Heart and numerous chapter contests. More information on her workshops can be found on her website.