REVIEW : BEYOND FOREVER (O'KANE FOR LIFE #2) BY KIT ROCHA 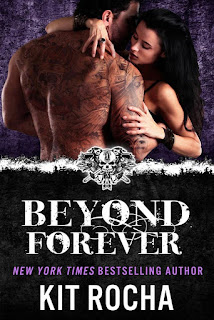 
Before they were the King and Queen…
Six years before the Beyond series started, an ambitious bootlegger named Dallas O’Kane caught a very pretty thief named Lex with her hand in his safe.
The rest is very sexy history.
In Beyond Forever, follow Dallas and Lex through the turning points in their relationship, from the night he caught her trying to rob him, through his rise to successful bootlegger, to legend, to Sector Leader--with Lex always there, willing to give him the push he needs.
Beyond Forever is a prequel novella that jumps through time to tell the story of the biggest moments in the formation of the O’Kanes and their King and Queen. It will be far more enjoyable if you’ve already read Beyond Control, and contains spoilers for the entire Beyond series.